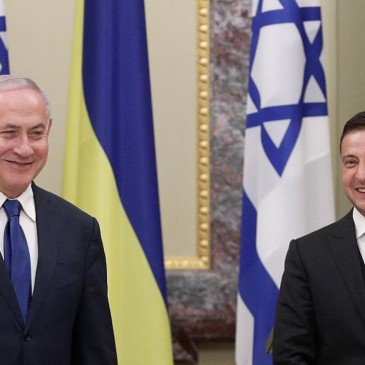 A Jewish president of Ukraine in the context of a war with Russia serves a number of functions — and that is what Volodymyr Zelenskyy is, a US-NATO functionary: he’s the cost the Ukrainian Nazis have to pay the Americans and Israelis who are left feeling a little dirty after being in bed with them, he is clueless and will do what he is told (or, at least, do nothing), and he is the perfect cover in a propaganda war where Vladimir Putin has hit the nail right on the head by identifying the connection between the US and the Nazis. … END_OF_DOCUMENT_TOKEN_TO_BE_REPLACED

Russia and Ukraine have lived side by side for over three decades without Russia invading. Ukrainian neutrality has, since the dissolution of the Soviet Union, guaranteed peace between these two states. Yet, US government involvement — including clandestine involvement — in the Orange Revolution and the 2014 Maidan coup have revealed Washington’s intentions to push for a war with Russia over a wholly manufactured and unnecessary conflict in Ukraine. … END_OF_DOCUMENT_TOKEN_TO_BE_REPLACED

An old bait and switch happened. No longer are we to be concerned. The focus has moved from the far-right’s military strength and its danger to Ukrainian democracy to its irrelevance within the democratic institutions and lack of popular support. Because so few people vote for the Nazis and because ‘Zelenskiy is Jewish,’ there is nothing to worry about. The narrative of Nazis being a threat to Ukraine was replaced with deflectionary asides about Putin’s fixation on the heroic myths of the Second World War and the Jewishness of the Ukrainian president. … END_OF_DOCUMENT_TOKEN_TO_BE_REPLACED

There can be no question that this new configuration will establish the territorial boundaries of the new Cold War. And nothing of this should come as much of a surprise to anyone in Washington or Brussels. George Kennan and Henry Kissinger warned that NATO expansion into eastern Europe would provoke a conflict with Russia. Mikhail Gorbachev, Boris Yeltsin, and Vladimir Putin each expressed their concerns over the extension of US hegemony in the region, and in 2015 Noam Chomsky reminded the West what the end of Ukrainian neutrality would trigger. … END_OF_DOCUMENT_TOKEN_TO_BE_REPLACED 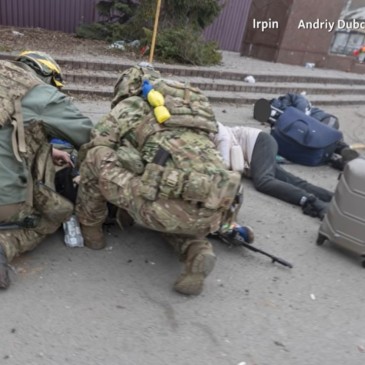 We cannot lose sight of the fact that this is a conflict situation. The developing war in Ukraine is a complex conflict involving not only two belligerent sides, but any number of covert operators. While it may appear obvious that the Russian army is the guilty party, and this may well be the case, this conflict is being watched closely around the world. It does not serve Russia well to be seen violating a ceasefire and shelling civilians in a humanitarian evacuation corridor. … END_OF_DOCUMENT_TOKEN_TO_BE_REPLACED

US foreign policy strategists — or gamers — are not interested in defending Ukraine. They are interested first and foremost in weakening Russia. In this, then, Ukraine has been instrumentalised by the State Department as a theatre of war in which Ukrainians — trained and armed by the United States and its allies — will wage a protracted war of attrition against Russia which they simply cannot hope to win. Washington, however, does not need them to win. It needs them to fight for as long as they can and inflict as much damage on Russia as they can. This is ‘winning’ for the United States. … END_OF_DOCUMENT_TOKEN_TO_BE_REPLACED

The Maidan, that is the 2014 Ukrainian revolution, was a defining moment for Ukrainian Nazis. Far-right and neo-Nazi groups, with their distinctive red and black flags and paramilitary outfits were a highly visible element of the protests and uprising. They were instrumental in Kyiv in ousting the government, and their support was quickly sought by the new ‘democratic’ regime. This, of course, is one of the most difficult parts of the story for non-Ukrainians to get their heads around, and — like much of the politics of Ukraine — it is complicated. … END_OF_DOCUMENT_TOKEN_TO_BE_REPLACED

Standpoint Zero is all about up-to-date analysis of geopolitics, unbiased journalism, and the reporting of changing global political realities and conflict. Our editorial position is simple: war is a crime – indeed, the greatest international crime. By working to understand both the causes of conflict and the dynamics of war we can, however, contribute towards an environment in which peace-making is always the first response. We’re about making the world a better place.

Can you support Standpoint Zero in its mission to deliver quality news and analysis? For as little as €1 a month you can help keep this website going.
Your writers need you!

TOP OF THE HOUR

WHAT YOU LOOKING FOR?